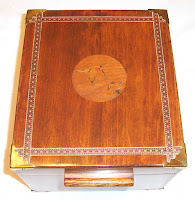 Traversing the path laid out by grief is a difficult chore, for sure.  We grasp at straws, lose our self-composure more often than we would like, and hold onto precious keepsakes at any cost.  Allan’s box was just such a keepsake in the road I traveled when we lost him unexpectedly early in 1994.  Now, it serves to hold many other keepsakes from my life with him and I cherish every memento protected within its confines.  I began writing this piece on Thanksgiving day, 2007, over thirteen years after Allan’s death.

Early one morning in late 1993, Allan carried a stack of empty shipping cartons to the trash receptacle behind the Family Dollar Store on Jewella Avenue in Shreveport. As he neared the dumpster, he realized it was quite full; but, amidst all the debris, something unusual caught his eye. Curiosity got the best of him and he laid aside the cardboard boxes he was carrying in order to retrieve the item. Someone had discarded an old, wooden file box, battered from years of use, bearing a broken hinge and split bottom. But no matter how worn out it was, the box radiated a different aura when seen through Allan’s eyes.

That evening, he proudly showed me his newfound treasure. If memory serves me, I was virtually speechless as I tried to equate his enthusiasm to the broken, scarred box laid out before him on his workbench. I remember asking “What are you going to do with THAT?” Allan flashed me that familiar smirk and responded with his standard answer to any repair question…“I’ll sand it down.” I recollect both of us laughing as I came back with, “No, REALLY, what are you going to do with that?”

Allan then gave me limited insight into what he had seen when he happened upon the box. He explained that the file box was solid wood, sturdily constructed in the early 1950s with tongue and groove corners rather than nails or screws. It was evident he saw great character where I saw age. He insisted that all it needed was a couple of minor repairs and it would be useful for years to come. I think I may have muttered something like “Whatever!” as I turned to go back into the house.

Over the next weeks, Allan spent much of his spare time at the workbench. He carefully disassembled the box in order to repair the split bottom. He added numerous layers of wood filler to the splintered floor of the box, sanding it smooth over and over again between each application. Next, he stripped away the old finish, sanding each piece to diminish the many scrapes and scratches, definite signs of long and constant use. He carefully repaired the broken hinge so the lid once again rested snuggly on the box. The night Allan reassembled the pieces, I recall him detailing his progress, as he eagerly explained that he was finally ready to stain the refurbished box.

Sadly, tragedy struck our family suddenly when Allan died unexpectedly on January 25, 1994, at the young age of 47, less than two months after finding the box. As with most who suffer through grief, I left his things just as he had left them, including the box on the workbench. Several weeks after Allan’s death, his Dad, Augie, came by the house to check on us. As he prepared to leave that evening, he stopped in the garage to look at Allan’s workbench. His gaze went immediately to the unfinished box and then to me, with questioning eyes. With a heavy heart and through a downpour of tears, I related the story of Allan’s box to him. Right then, right there, I saw the same look in Augie’s eyes that I had seen in Allan’s months before. Simply and quietly, he asked if I wanted him to finish the box for Allan. As I nodded, he gathered what he needed and left me standing in the garage, head in hands, sobbing quietly.

Several months passed and it is fair to say that I really had not given much thought to the box. Then one evening, Augie called to say he was on his way over to return Allan’s final project. I felt no particular anxiety about seeing the box; I had no special expectations. After all, it was just a worn out, old file box. Instead, it was more with resigned acceptance that I watched as Dad carefully unwrapped Allan’s box.

Yet again during this tearful journey, I found myself speechless. Augie’s weathered but capable hands extended toward me an exquisite piece of workmanship. The box was truly breathtaking! The deep, glass-like finish glowed warmly under the overhead lights. Augie had added delicate brass fittings to finish the corners. He had routed out a thin border around the lid, which he inlaid with intricate stonework. He also routed out a circle inside the stonework border, where he inlaid a beautiful hummingbird cameo. As I carefully lifted the lid, I found that he had even lined the interior of the box. Of course, my tears began to flow as I told him just how beautiful the box looked and how much it meant to me that he had finished what Allan had started with such a sense of purpose and determination. Dad graciously but succinctly said he was glad he had been able to do it. What I did not express to him that day was my realization that the two of them, father and son, poured from the same mold, had a vision for that worn-out file box…a vision the two of them together were able to make a reality. That realization only came to me after some time had passed.

All these years later, we have now lost not only Allan, but Augie too. Allan’s belief, that, if rescued and repaired, the box would certainly be useful, has proven true. My beautiful memory box still sits in a prominent place on our bedroom dresser. I often stand and admire the detailed workmanship so resolutely restored to a once dilapidated box by the two gifted craftsmen in my life. Other times, I lift the lid to gaze upon the personal mementos of my lost love. But more than the obvious, it has served to drive home some important life lessons.

Attitude is everything no matter what you are up against…any project, job, adversity, illness, or tragedy shrinks in comparison to a steady, willing vision and positive mindset. Patience, perseverance, and diligence are characteristics proven to wield undeniable influence on all aspects of our lives.

Look for the good, the beauty, the usefulness in everyone and everything. Sometimes, untold radiance lies just beneath the surface, waiting for a little encouragement, a little TLC, from the right person to help it shine.

Allan’s box opened my eyes to the concepts of hidden beauty, uncultivated possibilities, and unrecognized usefulness. And, it alternately has kept me focused on what it takes to change such possibilities into realities. As you admire the beauty in Allan’s box, brought to the surface by him and his dad, step back so you can focus on the traits that made the transition possible, as well.