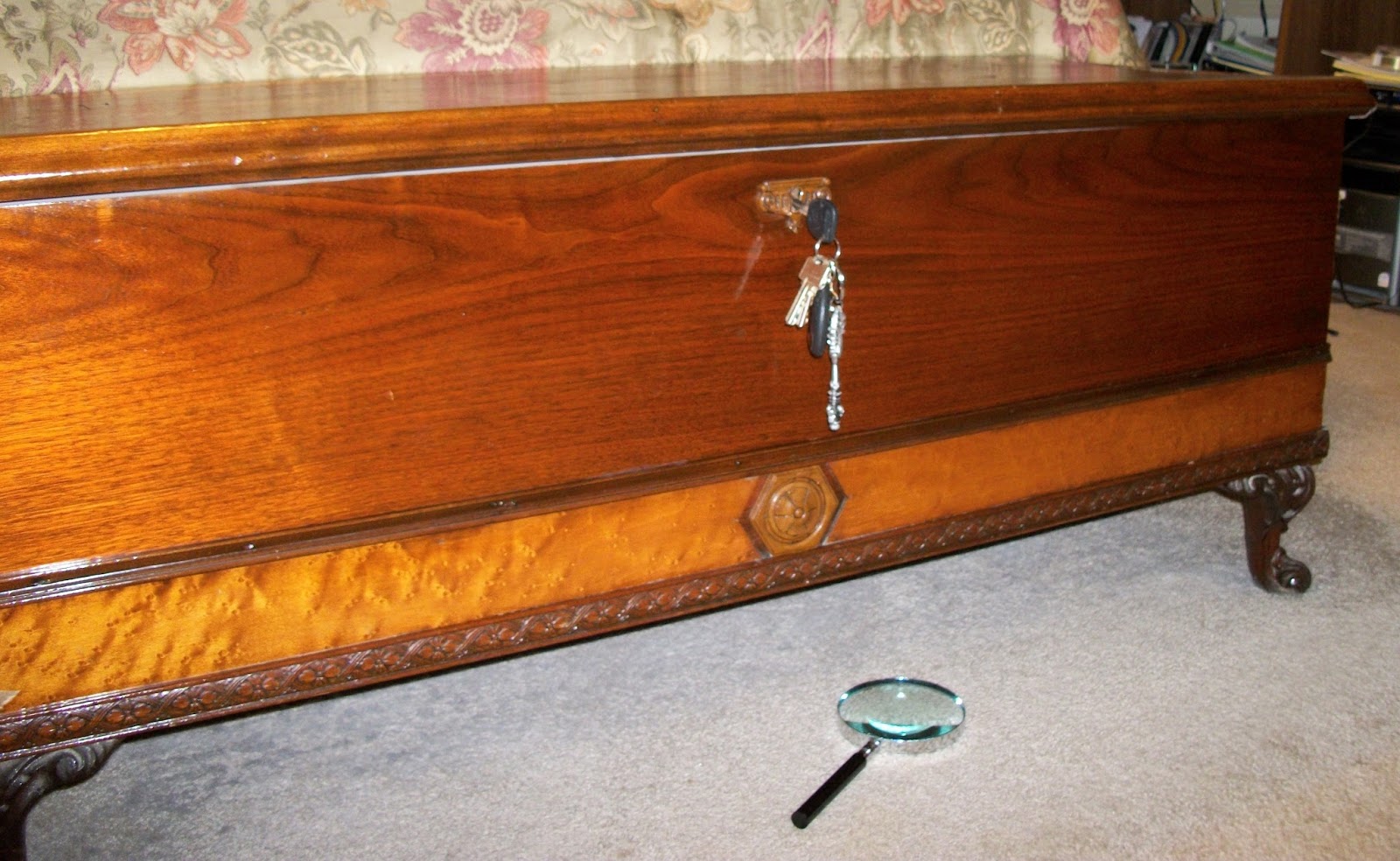 I had not read this piece in some years, but as I reread it today, I cried yet again.

My day did not begin like most others. Presley had been with me for an extended visit while Tamara was out of town, so I found myself running from one end of the house to the other, as I endeavored to feed Presley breakfast and dress him for pre-school. At one point, I returned to the bedroom to find Presley on his knees in front of the cedar chest situated at the foot of my bed. The expression on his face was priceless and begged interaction on my part.

He looked from the chest to me and back again as he asked inquisitively, “Gwanny, is this a tweasure twunk?” I could barely conceal my amusement as I confirmed his fanciful suspicions. It was at that point I realized Presley was holding Gramps’ old magnifying glass, as he tried to get a glimpse of the chest’s contents by peeping through the keyhole. Believe me when I tell you there is no doubt Presley is all boy and has the imagination to go along with it. Suddenly looking altogether deflated, he announced, “I can’t see it, Gwanny. We need to get the key. Where is the key?” I explained that I don’t have a key to lock or unlock the chest; but he was quite sure there had to be one and believed it must be with my car keys. Rather than argue the point, I surrendered my key ring to our little treasure hunter. He tried various keys unsuccessfully before he laid them aside, grasped the lid of the cedar chest with both hands, and, uttering his best he-man grunt, strained to lift it. “It’s too heavy, Gwanny.”

Curious as to what was on his mind, I asked, “What do you think is in that treasure trunk, Presley?” He simply shook his head and shrugged his shoulders, as if to say he didn’t know; so I tried a different approach. “Do you think there is gold in the treasure trunk?”

“No, Gwanny,” came his confident answer.

“Hmm, do you think there are diamonds and rubies in there, Presley?”

This precious, unsolicited conversation, coupled with the fact that today is the thirty-first anniversary of my marriage to Allan, resulted in me writing yet again about one of Allan’s wooden boxes, one of the oldest pieces of furniture in my house. In reality, Presley’s treasure trunk is a very old hope chest, which had been deposited on the curb for trash pick-up over thirty years ago. Allan, by chance, passed by and could not believe someone was actually discarding such a beautiful piece of craftsmanship. He knocked at the residence door to make sure it was his for the taking. Thus began a journey to rescue and refinish a wonderful piece of furniture. As with the worn-out, wooden file box he was refurbishing at the time of his death, Allan could see beauty just beneath the surface of most items, even when scarred by long years of use. This piece was no exception. Crafted from two kinds of wood and borne on beautiful claw feet, the cedar chest has an ornate keyhole, that smallest of details which evidently caught Presley’s attention. We have never learned who made the chest or the period during which it was crafted, mysteries which perhaps lend to its overall appeal.

Presley’s untainted assessment of the chest and his response to my questions gave me pause, left me thinking about the past. Consequently, I found myself wondering if I truly understand what, in particular, makes something a treasure. Is there a universal meaning for the word? Searching an online dictionary, I found three basic definitions: 1) wealth, such as money, jewels, etc.; 2) something of great value; or 3) a collection of precious things. Although I comprehend each usage, I have to say the third definition hit the nail on the head, so to speak. It absolutely rang true when I thought about the various items cached in our old chest, each article precious to my family in one way or another. As I thought back to the weeks before we merged our two households through marriage, I remembered Allan being quite clear. There were only a few items he did not want to part with, and, without a doubt, the cedar chest fell into that category. I now understand that Allan deemed it a treasure. Thus this fine, old cedar chest has held a place of prominence in our bedroom all these years.

To be honest, until Presley’s sudden interest, I had never considered this piece of furniture as anything more than a cedar chest, a place to secure keepsakes. As I stood there, with the lid raised, I saw just what one would expect: old birthday and anniversary cards, clothing from Tamara and Ashley’s childhoods, all the plaques and awards Allan received for his professional accomplishments, prized drawings by the kids, even the ring-bearer pillow from our wedding. The list of our family treasures goes on and on. And as I heard Presley exclaim, “This is so beautiful,” my mind flashed to the oft-quoted adage, one man’s trash is another man’s treasure. At that exact moment, I thought about the expression in a different light; the treasures we had safeguarded through the years were not just the items inside the cedar chest, but included the chest itself. My special keepsakes mean little to Presley, especially at four years of age; but I relish in the realization that he was somehow intrigued by Allan’s chest. A piece of furniture, intended to hold our keepsakes, has itself become a keepsake.

And what about treasures of the human variety? Cheyenne, Presley, and Katelyn (and now, since 2014, Elijah) are the gold-plated, diamond studded treasures that complete my life and give it meaning on a daily basis. And now, this precious grandson, whom Allan never knew, has formed an incidental attachment to Allan’s treasure trunk. How Allan would have spoiled these children! I believe he is smiling down on us, pleased by such a simple, yet ethereal, connection to one of his grandchildren, while reaching out for the others. Happy anniversary, Allan!

Getting to Know Mother Egret