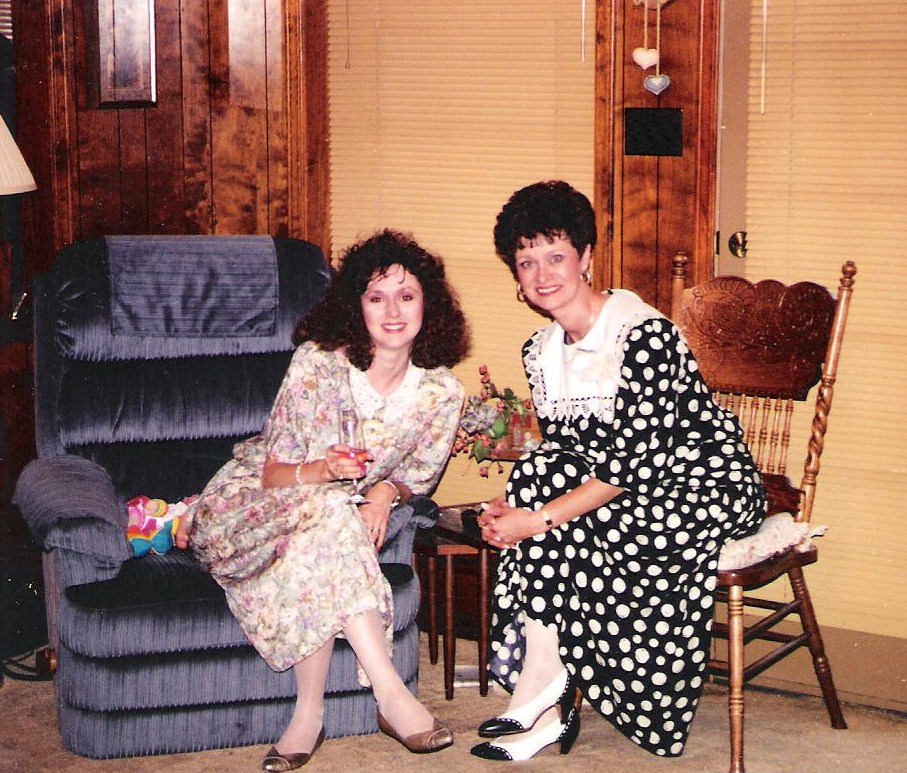 The love of siblings…can you describe it? As an only child for almost twelve years, I longed for the love, the companionship, and the trust that grows from a close family relationship. When I was finally blessed with a sister, my life changed forever. There is nothing like true sisterhood. I wrote this for Marsha in December 2008.

As an only child, I wanted a brother or sister more than just about anything. I remember coaxing Mother with promises about how great it would be to have a baby in the house and reiterating all the ways I could help her take care of an infant. When that seemed to have no effect, I tried telling her how lonely I was with no other children in the house. Today I feel relatively sure that my sentiments on the subject had little impact on the decision she and Daddy made to have another child; but I must admit, at the naïve age of eleven, I believed I had been clever enough to influence the final outcome.

Growing up, I often spent summer months in the home of Mother’s sister, Ida Louise Pounds Bertoniere. In August 1957, Aunt Ida gave birth to her first son, Jeff. Ten years his senior, I took great pride in helping Aunt Ida care for Jeff. Spending time with her baby boy further fueled my desire for a sibling. In 1958, Aunt Ida discovered she was pregnant again and, only a short time later, Mother learned she also was pregnant. I was ecstatic! Two babies! As their pregnancies progressed, I was included in various discussions about what to name the new babies. My parents decided rather quickly on a boy’s name, Charles Gregory; but the matter of a girl’s name proved more difficult to settle. Mother and Daddy finally agreed if the baby were a girl, they would call her Marsha; but they lovingly allowed me to select her middle name. Poor Marsha!

My favorite television program at the time was Yancy Derringer, an American cult Western series, set in New Orleans. I was fascinated by one of the main characters, Madame Francine, played by renowned actress Frances Bergen. Madame Francine was the strong-willed but beautiful owner of a members-only gambling house in New Orleans, circa 1868. Never having seen her name in print, Mother (and I) unknowingly chose to spell it differently from that spelling used in the TV script; thus we finally agreed if the baby were a girl, she would be named Marsha Franciene.

Anxious to help Mother prepare for the new arrival, I borrowed a newborn diaper shirt from Aunt Ida in order to cut a pattern from newspaper. From my weekly allowance, I bought a small piece of cotton batiste fabric, pale yellow in color, and set about cutting out and sewing by hand the tiny shirt. When finished, I embroidered a small yellow duck and the name Greg in blue. I do not necessarily remember wanting a brother more than a sister so much as I recall being influenced by Aunt Ida’s firstborn, Jeff. I believe the significant point to be taken from my actions is the importance I placed on the impending birth of a baby in our family, boy or girl.

During the fifth or sixth month of Mother’s pregnancy, the unthinkable happened. She awoke one morning to find thick fog blanketing the area around Bogalusa. She used extreme caution as she drove toward Hagedorn Motors, her place of employment. In 1959, her route would have taken her north on Highway 21, old Columbia Road; but as she approached Marshall Richardson Road, she realized traffic was stopped to allow a construction crew to move heavy equipment across the roadway.

At this point, let me digress from the story a bit. Old wives’ tales are often dismissed as so much foolishness; but sometimes, there is substantial reason to re-evaluate the merit of such tales. Mother was born a twin, whose sister died when less than one year of age. Mama Pounds often told Mother she had been born “with a veil,” a membrane over her face that was believed to foreshadow the gift of extrasensory perception, the ability to sense things others cannot. Her twin, Wilma, bore no such veil.

Now back to my story…Mother never revealed whether she was simply apprehensive because of poor visibility or if she actually sensed that something unfortunate was about to happen; but she related that she braced herself by placing both forearms across the steering wheel and tapped the brake pedal so her brake lights were continually flashing. Alas, the fog was too dense and an approaching vehicle crashed forcefully into the rear of her car. The impact broke the front seat and thrust it forward, pinning Mother’s left leg between the steering column and car seat. Mother suffered a blood clot, larger than a saucer and extremely ominous in color, on the back of her left thigh. After receiving medical attention, Mother was released into the care of her family and ordered to bed rest. Over the following weeks, Mother’s condition improved but the blood clot stayed with her for a number of years and was a source of concern for her family.

Approaching her due date, Mother experienced few of the preliminary signs that she was about to go into labor. Eventually, her doctor chose to speed the process along – but not by practices commonly prescribed today. In order to induce labor, he instructed Mother to drink a four-ounce portion of Castor Oil. Ewwww!!! My memory of this event is so vivid I find it hard to believe it has been forty-nine years since it happened. In my mind’s eye, I can still see Mother, swollen with child, standing at the kitchen sink with a coffee cup in her right hand. She would start to drink from the cup, then hesitate as she said to Daddy, “Charles, I can’t do this.” Daddy, in turn, would reply, “Willie, just drink it. Just drink it, Willie.” I honestly do not remember how many times this discourse was repeated but I do remember the full-body shiver Mother experienced as she forced down the last swallow of Castor Oil. Shortly thereafter, Mother and Daddy left for the hospital and what seemed like an eternity later, Daddy finally called to tell me about the birth of my sister, Marsha Franciene Williams, weighing in at just over six pounds.

Marsha was truly a beautiful baby with chocolate eyes and a head full of rich brown hair, but it did not take long to recognize that something was amiss. Regardless of how much formula she took, she would spit up the major portion of it. Marsha could keep nothing on her stomach. I wanted to see her; I desperately wanted to hold her; but that would have to wait. Medical experts advised that our long-awaited baby girl had been born with an intestinal blockage, probably resulting from the trauma of the automobile accident some three months earlier.

The day Mother was discharged from the hospital and came home without Marsha was stressful beyond description. As a mother and grandmother myself, I cannot imagine the pain and anxiety she felt as they drove away from Bogalusa Community Medical Center, leaving her newborn behind. The doctors felt the traumatic injury would heal itself as her little body grew, and it did, but it was not an easy road. She remained in the hospital for several weeks; Mother and Daddy spent as much time with her as they could.

When Marsha was finally released into our eager arms, she required constant monitoring. I recall that Mother was apprehensive about leaving Marsha anywhere and the church nursery was no exception. For that reason, she chose to take her to worship service with the family; but because Marsha often spit up unannounced, she carried her on a bed pillow. (“Infant seats” or “baby carriers” were not yet popular in 1959.) We spent many of those first Sundays simply praying that Marsha would not spit up or cry during church!

Slowly but surely over the first months of her life, Marsha’s medical issues were resolved and, unbelievably, she began walking by the time she was nine months old. What a “handful” she was then, challenging us every step of the way. But what joy she brought into our lives! As I think back on those memories, those events paramount in the life of an eleven year old, I now realize that Marsha is the sister who was meant to be. Flash forward forty-nine years. Consider Marsha’s journey in retrospect – eleven years between pregnancies, traumatic wreck, difficult labor, born with an intestinal blockage that required medical treatment and constant attention. Mercifully, Marsha has traversed every inch of the path God has laid out for her so far, turning stumbling blocks into stepping stones. A most loving daughter, Marsha is also a dedicated, Christian wife and mother; an accomplished, professional third-grade teacher; a compassionate, true friend; and a wonderful, steadfast sister. My life would have been incomplete without her, without our sisterhood!